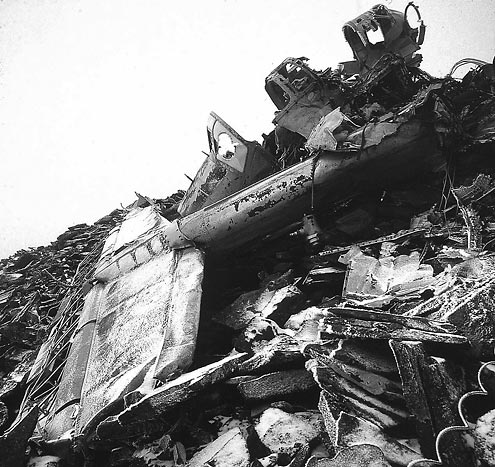 This torpedo bomber with Canadian crew took off at 08.30 pm from Sumburgh, Shetland. Along with 16 Hampdens from 455 Squadron. They were on a transfer flight to Vaenga, via Afrikanda in northern Russia. PL-J crashed into the remote mountain Tsatsa in Swedish Lapland.
P/O D. I. Evans and Corporal B. J. Sowerby survived the crash and were interned in Sweden for a while. Flight Sgt. James Steven Jewett (21), P/O William Henry Bowler (31) and Flight Sgt. John Parker Campbell (27) were all killed in crash. They are buried at Kviberg Cemetery. Eight of the 32 Hampdens of 144 and 455 Sqdn were lost on route due to bad weather and navigational error.
One Hampden (AE356) was shot down by Russian fighters:

The wreckage of AE 436 was found nearby the top of the 1852 meters high mountain Tsatsa in August 1976, thirty-four years after the crash.

AE310 of 144 Sqdn also ran out of fuel and landed at Afrikanda. Crew unhurt.

AE356 of 144 Sqdn was shot down by Russian fighters in the vicinity of Murmansk. Sgt. Walter Thomas Tabor was killed The remaining four were unhurt.