Accidentally Shot down by own AA-fire from the coastal fortress at Skjellanger, and a flak boat at Manger.
The aircraft crashed here at tiny island Toska. Fw.Sommeregger managed to bail out of the burning aircraft
and landed into the sea at Hellaosen. He was shortly after rescued by some Norwegians
and brought to Manger. Sommeregger received severe burns in his head and hands.
Thanks to vegar toska for pictures and info.

Five months later, he finally ran out of luck when he was shot down in a combat with Hampdens south-west of Egersund. His Bf 109 G-2, WNr.14055 crashed ito the sea. A life west and some oil spill was all that were found. 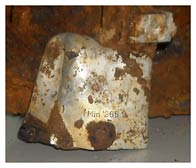 Wreckage found at the crash site