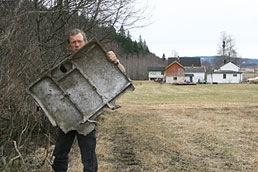 The Heinkel bomber crashed shortly after take off from the north-south runway at Værnes. Flames were observed from the port engine as it passed Hellesberget. The A/C crashed into a bog at Tønsåsen. The bomb load went deep into the bog and luckily did not explode. The crew of five all died in crash. Pilot Feldw.Georg Bergmann. Uffz.Herbert Deichert. Regierungsrat Dr.Helmut Heinze. Feldw.Fritz Hoch. Leutnant Hans Weichert. All rest at Havstein Cemetery. 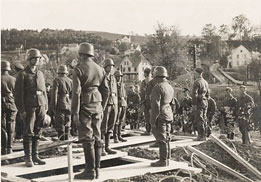 1. October 2008 © kjell sørensen
October 2008
A kindergarten is being built above the crash site. Nothing is left of the aircraft here to day