27 Lancasters and one Lancaster with a camera man took off for the raid on the Tirpitz, on 15. September 1944.

The attack caught the Tirpitz by surprise. One Tallboy bomb hit the Tirpitz near the bows. Other bombs damaged the battleship's engines, but they failed to sink the ship.None of the Lancasters were lost in this attack.

The ten bodies were at first buried in a mass grave by the germans. They were later re-buried at Nesbyen Cemetery.

Among the debris at the crashsite, there is a white wooden cross, with 10 black spots. 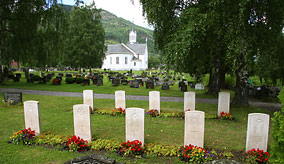 On 17. September 16 Lancasters took off from Yagodnik airfield in Russia at 19.21,to return to Lossiemouth . Probably due to engine trouble, one Lancaster crashed at this hillside in Nesbyen at 02.15. (Pilot) F/O Frank Levy. (Nav.)F/O Charles Lawrence Fox. Sgt. Flt. (Engr.)Peter William Groom. Flt. Sgt. (W.Op./Air Gnr.)George Muir Mcguire. Pilot Offr. (Air Gnr.)Allan Frank Mcnally. Flt.Sgt.Air Bomber Eric Edward Stephen Peck. Flt.Sgt.(Air Gnr.)Daniel Gorowny Thomas. In addition two members of another crew, who had days before survived a crash landing that had written off their aircraft. Those two are:Flying Offr. (W.Op.)Denis Charles Shea and Flying Offr. (Flt. Engr.)James Frazer Naylor. There was also a tenth body found at the crash site. His name is still unknown.(maby he was an Russian refugee?) This crash was the only casualty of the attacks on Tirpitz in September 1944
2005
On 11.September 1944 38 Lancasters of Nos 9 and 617 Squadrons, and a No 5 Group Mosquito for weather reconnaissance had set out to fly to Northern Russia to prepare for a raid on the battleship Tirpitz, which was at anchor in Kåfjord.One Lancaster had to return to Britain, and six other crash-landed in Russia at Varna, Vascova, Onega City and at Keg Island. The rest of them managed to land safely at Yagodnik in Arkhangel.