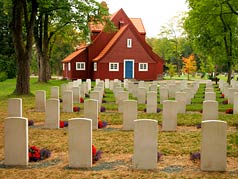 Lascelles was lost without trace in a Warwick aircraft 13.11 1945. He is commemorated on the Runnymede Memorial

A force of twelve Hudsons lead by Wing Commander Pearce, took off from Sumburgh, Shetland at 1130. Their mission was to attack the German battle ships "Scharnhorst" "Gneisenau" and "Admiral Hipper" in Trondheim harbour. 269 Sqdn. lost two of their Hudsons in this air battle above Gaulosen fjord. UA-G made a forced landing on the fjord, 400m outside Steinshylla. All four on board managed to jump into the dinghy before the aircraft sank. Sgt. Erich T D Machell was badly wounded and died at the Red Cross Hospital in Trondheim the next day. The others: Pilot Sgt.Ernest Bruce Lascelles, Sgt A M S Brodie and Sgt J G Hepburn, became POW.

Hudson UA-P of same squadron was shot down at Buvik.