According to locals, the AC was shot down by enemy fighters, but this can not be confirmed in written sources so far.

The pilots are buried at Stavne Cemetery, Trondheim

Took off from Banff on a anti-shipping strike. Together with Mosquitos from 248 Sqdn they were attacking a convoy near island Kinn when they were hit by flak and crashed in the bog at Stavøya.
Pilot, Flying Officer Harold Llewellyn Powell (RNZAF) and navigator Flying Officer Norman Louis Redford (RAAF) were both killed in this crash. They were buried at Florø, but later buried at Stavne Cemetery, Trondheim. 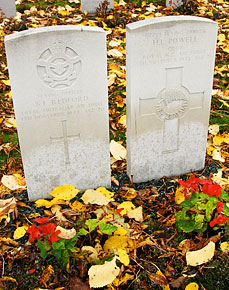