Hagerup managed to bail out, but it was too late. His body was found in the sea shortly after. Finne was found a few days later.

They were buried by the Germans at Askvoll Church. There is also a memorial erected at Askvoll church

F/333 and L/333(Lt.Offerdal) took off from Leuchars at 10.00 on a shipping reconnaissance mission along the Norwegian coast. South of Ytterøya they spotted a convoy of three ships, and they attacked immediately. F/333 was hit by flak and crashed on the shore. Pilot, Lt.Anton Christophersen Hagerup. Navigator, kvartermester Just Wiede Meinche Finne 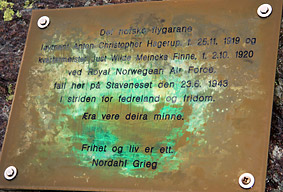 There is also a memorial of a downed Beaufighter at this place
18.04 2007 © kjell sørensen