Two Heinkel bombers took off from Vaernes late in the evening. Their mission was to drop supplies to the German forces at Narvik. Pilot on 1H+BN was Uffz.August Riehle, (belonged to 2. staffel). The other Heinkel was flown by Oblt.von Bothmer. After dropping their supplies they attacked a couple of transport wessels, unloading under the surveillance of five British cruisers and destroyers. Suddently their left engine got hit and started to burn. Their flight ended here in a hillside at Sjøvegan. All four survived this rough landing and started walking towards the Swedish border. Fw. Karl-Heinz Hess. Uffz.August Riehle. Ogfr.Josef Kopitz. Flg.Rudolf Entrich. Four days later they were captured by a Norwegian patrol lead by fenrik Rønneberg. The two German officers were brought to England. The wireless operator and the mechanic became POW's in Norway, but were soon released. Hess and Riehle spent six years as POW's in Scotland and Canada. 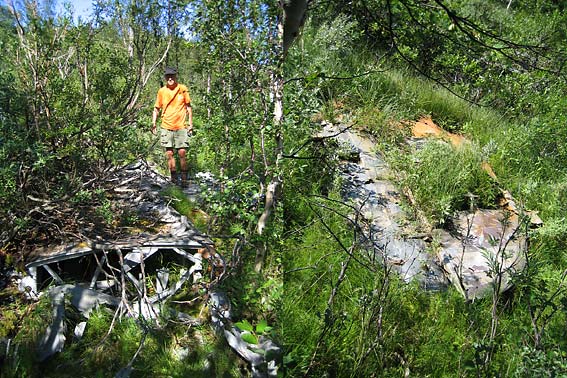 They managed to extinguish the fire and drop the rest of their bombload to gain some height. With one engine running they headed back towards Værnes.

Uffz.Riehle had damaged his left arm during an earlier attack and and needed help by his crew to turn the trim wheel to turn the rudder to the left, getting the pressure off the side rudder. In the heat of the situation it was turned to the right and far too fast. The plane stood vertical on the left wing. Riehle immediately pressed the Heinkel down to horizontal position, but they were now flying at ground level. He managed to steer the Heinkel into a little creek in the hillside. Both wings were ripped off, the fuselage was torn into two pieces and slided 300-400 m until it came to a halt.

They destroyed what was to be destroyed, took one of the MG 15 and some ammunition and off they went for Sweden. They were captured four days later at Moholt farm in Salangsdalen, only 12 km from the Swedish border.