"Operation Obviate" At one o'clock this Sunday 29.10 1944, 35 Lancasters of 9 and 617 Sqdn RAF took off from Lossiemouth, Scotland on a mission to sink the battleship Tirpitz with "Tallboy" bombs. Easy Elsie's starboard engine was hit by AA-fire over the target at Håkøya, but she managed to drop her Tallboy bomb. On their return leg they were hit again over Andenes, and yet another engine was knocked out together with the hydraulic system. The bomb hatch and landing gear fell open. Realizing they could not reach back home, they continued to neutral Sweden and performed a rough crash landing with wheels down in a frozen bog at Porjus. 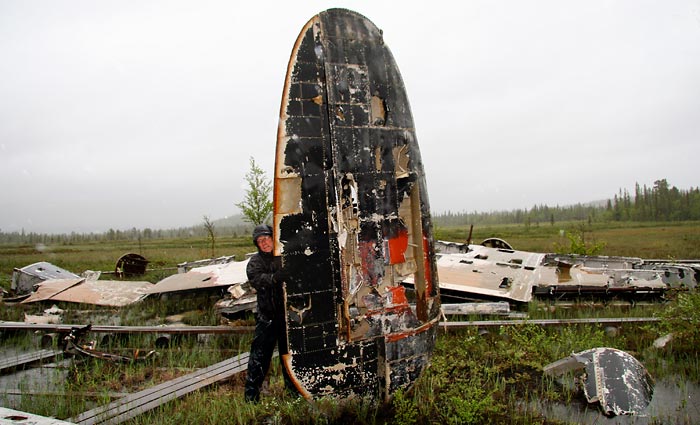 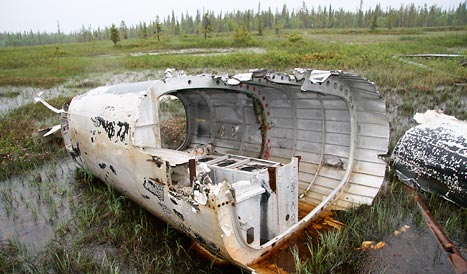 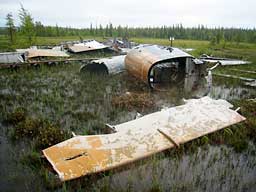 The pilot, F/O Carey injured his knee during the landing. The rest of the crew were unhurt.

The aircraft was set on fire by the crew. The wreck remained almost untouched until the mid-1960s, when a local scrap merchant decided to have a go at her.
The rear fuselage and other parts was recovered in 1984/85 and put into storage at the Swedish Air Force Museum. Ten years later, the remains were returned to the wreck site. In 1992 a path was made to the crash site, making it more accessible to visitors. Mr. MckKie, the navigator of Easy Elsie, visited the wreck site on his 80th. birthday in 2002.