This Blenheim propeller was caught in a fishermans net near Rugsundøy a few years ago. It might belong to Z6081, or X/254. The propeller was not there anymore when we visited the place again in July 2005.
A Blenheim shot down into the fjord south of Målöy was credited Walter Kalweit, from 3./JG77. His Rottenflieger, Lt. Edgar Habermann also claimed a victory in the same area, but it's possible that his victim was the Blenheim that made it back to Sumburgh.

The German battery at island Rugsundøy was bombed by two Hampdens from 50 Sqdn.HMS KENYA also opened fire on Rugsundøy. At 13:17 KENYA received a hit from the battery at Rugsundøy,which burst and holed her about ten feet above the waterline. 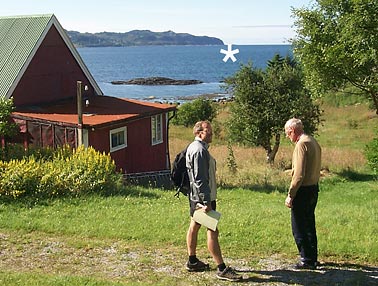 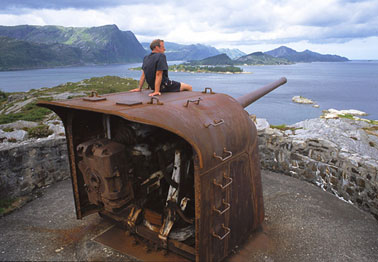 The first combined Army-Navy-Air Force operation of the war against German-held territory. 27.12 1941

Four Blenheim IV of 254 Squadron RAF,were attacked by Messerschmitts from Herdla. One Blenheim (X/254) went down in flames at 10:12, near Rugsundøy. Another Blenheim (A/254) crash landed at Sumburgh, observer and gunner wounded. Two Blenheims collided above Øygarden, Herdla, both crews were lost. A total of seven Blenheims, two Hampdens and two Beaufighters were lost in this daylight raid. Only one man of the crews survived.

Shot down by German Flak off Måløy. The burning aircraft crashlanded into the Vågsfjord.Both planes took off from Wick at 05.29 to support allied commandoes at Vågsøy.One of the smoke bombs from this Hampden,unfortunately struck a landing craft and caused some 20 casualities from burns.Sgt.Reginald Newbald Smith (Rhodesia), rescued from sea, but was later shot down and killed on 7.2 1942 by an Me.109 near Terschelling. Sgt. Derek Bell (Sandy) KIA. Sgt.John Drax Williams (KIA, body recovered and buried at sea). P/O. Robert Watson (KIA). A total of 10 Hampdens from 50 Sqdn were used for smoke laying and bombing.

110 Sqdn, RAF (Wattisham, Suffolk; detachment at Lossiemouth, Morayshire - 2 Group). Six Blenheims, each armed with two 500-lb. bombs,took off from Lossiemouth to patrol off the Norwegian coast southwards from Obrestad.  Four of the Blenheims were shot down by flak and enemy fighters while attacking a convoy four miles south of Egerøy. All four crews are commemorated on the Runnymede Memorial. P/O John Bruce MacLeod (KIA). P/O Henry Gordon Harris (KIA). Sgt.Thomas Eric Anstey (KIA)

One of the four Blenheims from 110 Sqdn, was seen to make a good landing in the sea with the port engine on fire, while another crashed into the sea after being attacked by a German fighter. P/O David Montgomery Jenkinson RCAF(KIA). P/O Roderick James McLachlan RCAF(KIA). Sgt.Ronald Charles Hawkes (KIA)

Note:  These were the heaviest casualties suffered by 2 Group since mid-October when seven aircraft were lost while attacking shipping targets.  Furthermore, in respect of 110 Sqdn and 114 Sqdn, twenty-seven Blenheims had failed to return from operations during 1941; from this total one airman had survived.

Took off from Lossiemouth at 0925. Collided with Blenheim Z7500 RT-H while attacking Herdla airfield. F/S Robert Wilson Fisher RAAF(KIA). Sgt.James Williamson (KIA). Sgt.William Frederick George Fletcher(KIA) All are buried in Bergen (Møllendal) Church Cemetery, Norway. Three Bf.109's of I./JG77 were damaged on the ground at Herdla airfield by this attack.

Took off from Dyce,Aberdeenshire.  The aircraft was shot down by an Me 109 off coast of Norway. It was last seen to spin into the water from 300 feet.  Both P/O William Halstead Hughes and Sgt Clifford Frederick Myhill rest in Stavne Cemetery, Trondheim.

Took off from Sumburgh in company with two other Beaufighters to escort a convoy. Last seen breaking off after attacking an Heinkel 111. P/O Ronald Arthur Baseby(KIA). Sgt.Stanley David Gummery(KIA). Both are commemorated on the Runnymede Memorial.