John Morrison who returned 61 years after crash landing there to thank the Norwegian people who had assisted him and other members of his crew, after they found themselves on the run in German occupied Norway in 1942.

Unveiling of the memorial at Elverum and Sørmo farm in Markabygd 2.6 2003

In May 2004 Mr. John Morrison came back again to visit the people from the farms Elverum and Sørmo. 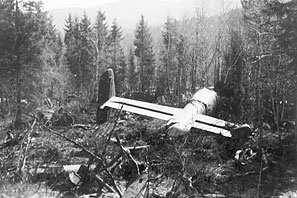 Took off at 2035 hrs from RAF Kinloss in Scotland to participate in an attack on the German Battleship Tirpitz which was moored at the time in Fættenfjord in Norway. The aircraft was hit by AA fire while flying over Tirpitz and caught fire. The pilot managed to crash land the aircraft on some farmland just east of Lake Movatnet. One member of the crew was killed, the others attempted to escape to Sweden but were captured and taken POW.