The paratroopers were soon attacked by a force of 25 Norwegian soldiers lead by Lt. Trygve Dalsegg. During the fight, one of the Germans Oberjäger Nikolaus Schröter, was wounded. Both crew and paratroopers became PoW's
Sources: "Krigen 1940-45 by Øystein Mølmen.
Erling Mossiges dagbok.

One of the Ju 52's ran out of fuel and ended in Sweden:
1Z+BC WNr.5196 of Stab II./KGzbV 1, made a safe landing on the ice of lake Vänern, Mariestad: Crew: Ofw.Kurt Bartel. Ofw.Josef Becker. Uffz.Werner Röhr. Fw. Ernst Rethmeier.

Due to the allied landing at Åndalsnes, and the immediate danger of them to join retreating Norwegian forces, Hitler ordered the railway junction at Dombås to be occupied by paratroopers. Fifteen Ju 52's took off from Fornebu at 17:00. The weather was very bad. Only five of the planes managed to return to Fornebu, two landed at Vaernes. The rest were shot down, or crash landed.
This Ju was hit by ground fire by Norwegian forces at Vingnes church. With two engines burning and a bullet in his shoulder, the pilot Oberfw.Nikolaus Schröder managed to land at Lysegårdsjordet with all twelwe paratroopers still onboard. Fw.Erich Weyer (KIA). Uffz.Paul Kalisch. Heinz Petermann, Richard Burgdörf and Heinrich Erthal, all wounded. The navigator had a shot wound in his foot, and the paratroopers of I./FJR were unhurt. Article in "Flyhistorie" Nr.28/2013 by Jan E Lie. 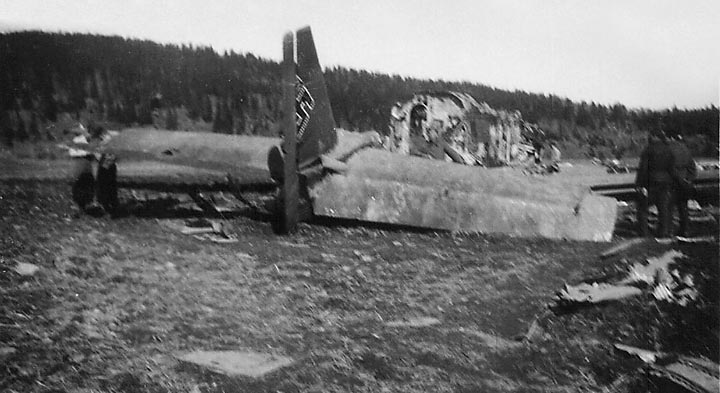