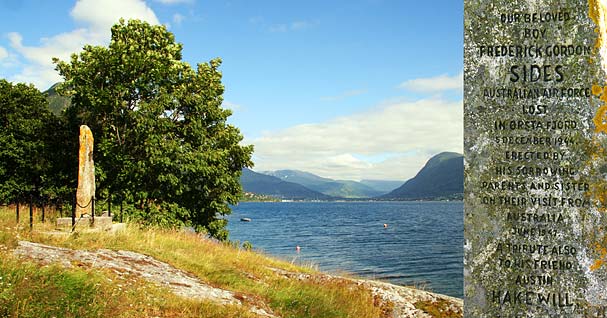 Ten Beaufighters of Australian 455 Sqdn, together with five from (New Zealand) 489 Sqdn, took off from Dallachy to attack shipping in Ørstafjord. They were supported by five Mustangs of 315 Sqdn RAF as protection against the JG 5 fighters at Gossen. Their target were the three merchant ships M/S "Radbod", M/S"Albert Janus" and Norwegian "Cygnus". They were protected by V 6805. Two more beaufighters were lost when returning from this raid. Robert Dunn had to make a forced landing with UB-X at Sumburgh, Shetland.Both crew were unhurt. UB-M had to ditch in the North sea. A Winther and C J Dunshea were picked up by a rescue boat.

Parts of UV-B was raised from the fjord in 1947. Sides' parents and sister visited the crash site the same year and erected this memorial at Lianeset

UV-B was hit by AA-fire from "Albert Janus", left engine was set afire and the A/C crashed soon afterwards into the bridge of vorpostenboot V6805. Navigator P/O Frederick Gordon Sides 21(Black Rock, Australia) managed to bail out, and landed in the fjord. His body was never recovered. Pilot F/O James Austin Hakewill 27(Billabong, Australia) went down with the plane.