A force of twelve Swordfish and six Skuas participated in this operation named "DT". Their target was shipping in the port of Trondheim.
The weather was so bad they never even found their target inTrondheim, nor their way back to the carrier HMS "Furious". Along with another Swordfish (L9756) they made a first class landing on a corn field at island Leka. Sub Lt. Hugh Noel Crawford Hearn, observer Alan Cheetham and gunner C.Jago became PoW's for the rest of the war. Four more "String bags" and a Skua of 801 Squadron were lost in this night-attack on shipping in Trondheim harbour.

Sub Lt. Henry Deterding, H.W.Brown and Douglas A.Poynter of the other Swordfish (L9756 of 825 Sqdn), also became PoW's. Sub Lt. Deterding was a retired millionaire in his late 30's. His father was the founder of Shell petroleum.

Skua L2942 of 801 Sqdn. made a forced landing in river Faxälven at Ramsele in Sweden. The pilot, S/Lt Bernhard Wigginson and his navigator, Leading Airman C.M. King were interned for a year.

Lt. John Read, S/Lt. Gordon Alfred Busby (21) and Leading Airman Leslie Arthur Webber (26) of 816 Squadron were lost when their Swordfish L2745 of 816 Sqdn crashed into the sea after failing to locate the aircraft carrier.

Swordfish L9731 of 816 Sqdn made a forced landing in heavy fog on a field at Ekne. Maj.J.Hanrahan. Naval Airman A.R.Purchase, and midshipman A.O.Atkins became PoW's. They managed to remove some instruments and set the Swordfish afire before the Germans arrived the scene.

After landing they set both aircraft afire. Luckily there were no Germans on the island at that time. With the help of the locals they got hold of a fishing boat and all six airmen set sail for Shetland, but after 48 hours in rough weather the engine suddently stopped and they drifted towards the coast of Norway again.
Landfall was made at Halten lighthouse where they were captured by some Kriegsmarine sailors based at the lighthouse. All six airmen spent the rest of the war in camps in Poland and Germany. Among them Spandau and Dulag Luft 3.

In July 1985 Mr. Hugh Hearn visited Leka again and met some of the people which helped them. He passed away December 2004, just two days before his 89th year. 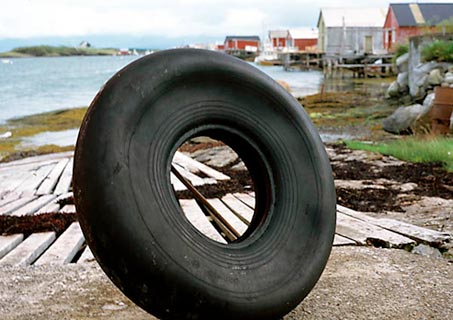 This tyre, found at island Vega probably belongs to one of the two Swordfishes which landed on Leka.
august 2001© kjell sørensen