Fw.Dreisbach who had baled out, landed in the sea just northwest of the crashsite. He was rescued by locals.He was probably shot down by L/C Ronald Arthur Bird in JV792 (Wildcat IV).

According to German reports, three planes from 10 Staffel in Jagdgeschwader 5 were lost, while a fourth was damaged during a landing accident at airfield Gossen. Locals told they saw a fourth plane ditch further north in Edøy fjord. Two more Messerschmitts ditched in the vicinity.

Bf.109G-6 WNr. 412398 went down in the sea at Stamskjærbrodden, a bit west of Dreisbachs crashsite. The area is scattered with skerries. Fw Hermann Jäger went down with the plane. His helmet was later found by some fishermen.

Crash site behind this hut at Langskjera 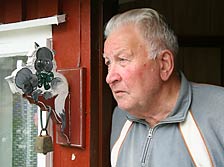 Bf 109G-14/AS WNr. 782139, piloted by Uffz.Gottfried Rösch ditched at Karihatten skerries one km sw of Jägers plane. This must be the man rescued by Edvard Artvåg and Edvard Aspvik. The plane came towards them at low height, it seemed that the pilot was attempting to decrease speed as much as possible before setting in down in the water not far from the boat. There was no fire, but the engine wasn't working. The pilot jumped out of the plane as it touched the water. The a/c sunk rapidly, and the two men rowed to the pilot that swam in the water, and heaved him into their small boat. The pilot didn't seem to have suffered any injuries.

Operation "PREFIX" On the morning of the 26th a strike force was flown off from HMS Searcher (882 Wildcats) and HMS Queen (853 Avengers) to attack shipping in Trondheim leads and Kristiansund area. Two flights of Wildcats engaged eight or ten Messerschmitts shooting down three and damaged two others.