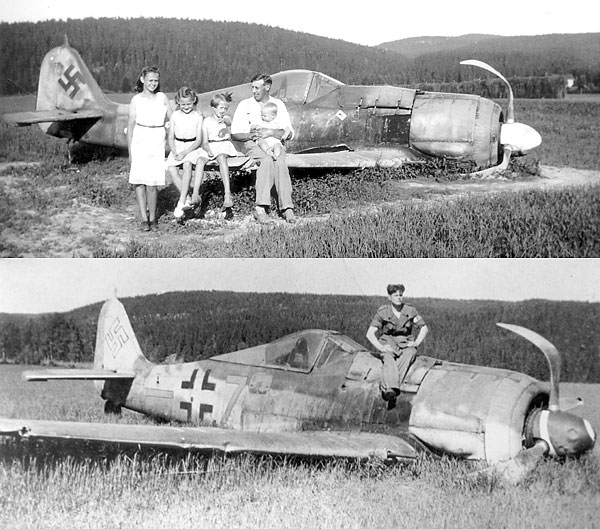 During the last days of the war, the Germans made a desperate attempt to redeploy as many aircraft as possible to Norway and Czechoslovakia. At least five Fw's were observed in the area of Rødenes. Three of them belly-landed in the area. Their unit is not known, but they probably took off from Leck, made a refueling at Veilje/ Grove, and continued in bad weather towards Kristiansand.

Two of the Fw's made a succesful forced landing at 08 oclock in the morning, on a field by the farm Østre Krok and were unhurt. Both pilots were from Estonia. Lt. Jan Sepa and Oberleutnant Edgar Martensohn.

A third Fw 190 (Gelbe 1 WNr.584911) made a succesful forced landing further north at the farm søndre Soprim. The 23 years old pilot Ltn.Kurt Sorge? took off from Sylt this morning along with seven other aircraft. A fourth a/c probably landed in the same area. Source: Article by Finn Aarum

In total 114 German airplanes managed to transfer to Norway this morning. They landed at Forus, Gardermoen, Kjevik, Lista and Sola. Three days later the war was over. 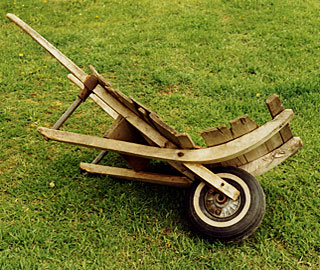 photo: bertha krog, via finn aarum
The Krog family in front of Sepa's "Red 3"
Martensohn's "yellow 7"
New usage of the tail wheel of Jahn Sepa's "red 3"
photo: reidar fjellengen, via finn aarum
©finn aarum
The Fw's were removed by German prisoners in July.The aircrafts were then blown up by RAF personell at Rygge in September.