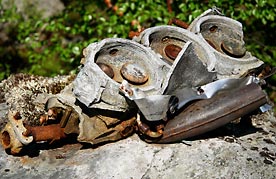 Shot down by German AA-fire at Akhmalakhti/ Koutsijärvi, near Nikel. The aircraft crashed on the Norwegian side of the border.
SLt. Rusakov lost his life. Source: Rune Rautio

The fuselage of this aircraft was salvaged by the Norwegian Armed Forces in 1979, just to be dumped soon after.

Left: Serial 7033 found on a piece of wreckage.