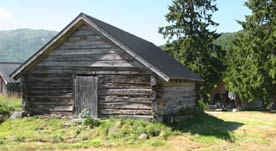 Almost nothing left at the crash site today. According to German loss lists, engine problem caused the crash. There is a possibility Uffz. Gaupner of 1/JG 5 was the pilot of this aircraft.

According to locals, the plane was hit in air combat above lake Horningsdal. The pilot parachuted and landed in Heggjadalen with a broken leg.
The A/C crashed at Mosenausen near by.