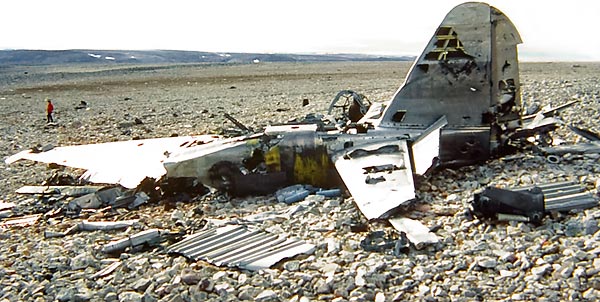 The AC took off from Kamanen in Finland on a recce mission to the coast of east Finnmark.
In the vicinity of Nordkyn they were suddenly attacked by 10-12 Russian Hurricanes. Both engines were hit and started burning.

The pilot Fw.Paul Steinberg made a belly landing on the plateau. The mechanic, Uffz.Konrad Lottes broke both his legs in the rough landing. He was also wounded by bullets from the Russian attack. Oblt. Günther Pipke stayed with the wounded mechanic, while Ofw.Hans Johannesen and the pilot walked down to Gulgo and fetched help.

The crew survived the war. In 1988, all four of them were back at the crash site again.

The last remains of the Ju 88 was removed by a Sea King of 330 Squadron RNAF in 1998.
The aircraft is now stored at the Norwegian Air Force Museum in Bodø. 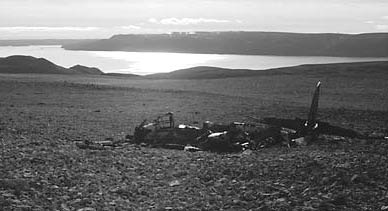 Fw.Paul Steinberg and same crew made another forced landing west of Holmfjellet near Tana on 26.01-44 with G2+EH WNr.1157.

Right: Twelve years later, in 1995, many parts of the aircraft has now disappeared.