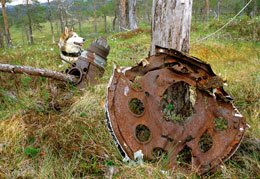 Took off from RAF Lossiemouth in Scotland, to participate in an attack on the German Battleship Tirpitz, moored at Fættenfjord north of Trondheim. They were hit by German flak and caught fire. W/C Bennett tried to fly to Sweden, but they were forced to bail out over Flornes. The burning aircraft crashed here at Flornesvollen. Eyles, Murray and How were arrested by the Germans, but the rest were helped by Norwegians to reach the Swedish border. 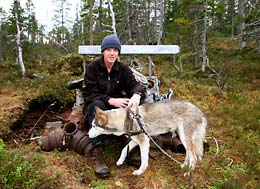 2001 ©kjell Sørensen
One of the engines is placed as a memorial at Flornesvollen.