Crashed into the cliffs of Fitful Head on the southern tip of Shetland on their return leg to Kinloss from a raid on Tirpitz, moored at Fættenfjord in Norway. All seven on board were killed in crash. Pilot F/Sgt.Joseph Bryan Busby (20). 2nd Pilot Sgt.Anthony John Peach (21). Navigator Sgt.Geoffrey Noel Edward Powell (22). W/Op Air Gunner F/Sgt.John Peter Burton Buckley (RCAF). W/Op Air Gunner Sgt.Moses Lewis Usher 25 (RCAF). Tail Gunner Sgt.John Allen Wood (24). Flight Engineer Sgt.Ronald H Meredith (32).
Six of the thirty-four bombers failed to return from this raid. This ac was one of three 35 Squadron aircraft which were lost during this operation.
Full story, made by Linzee Druce, grandaughter of one of the pilots which were lost during the raid here. 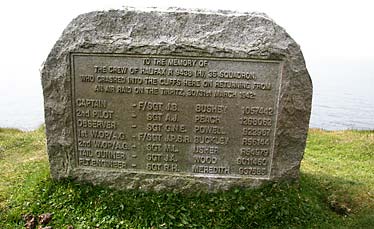 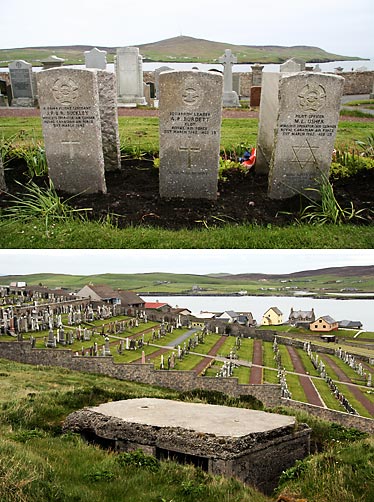 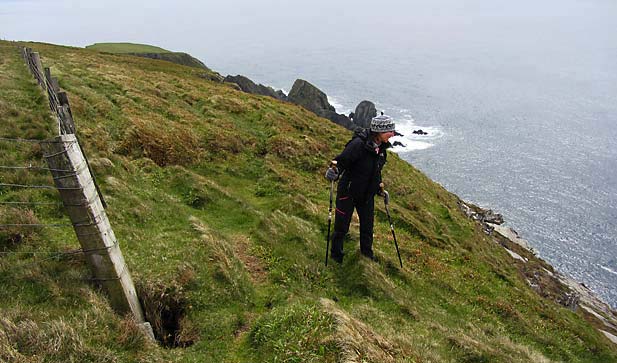 Two of the airmen were found here by the corner of the fence, still strapped into their seats.
Lerwick New Cemetery with a World War I bunker in the foreground. 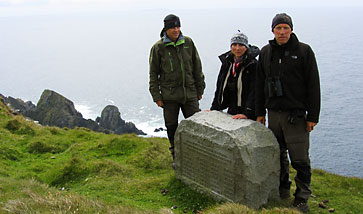 For many years a wooden cross marked the spot there the aircraft hit the cliff. However, over the years the elements took their toll and eventually it fell to pieces.

In June 1995 a granite boulder bearing the names of the crew was unveiled and dedicated at a memorial service.