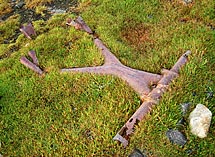 Below: Twin wheeled undercarriage. This indicates this was a C1 version Condor
3. August 2004 ©kjell sørensen

The Condor was returning from a mission to Harstad, when it was attacked and shot down by Gloster Gladiator (N5705) of 263 Sqdn. based at Bardufoss. Gladiator flown by F/O Grant-Ede. The Condor made a forced landing on the shore and burned out. Pilot Oblt. Hellmuth Schöpke and Fw. Eugen Fisher became POW's. Co pilot Oberfeldwebel Fritz Messer and Feldwebel Walter Börjesson (flight mechanic) managed to escape. Obergefreiter Kurt Hartleben(radio operator) died of his wounds. He is buried at Narvik War Cemetery (grave 33, block 8, row B1).
info via Günther Ott.

Engines in midnight sun.
The remains of the two BMW-Bramo Fafnir 323 nine cylinder radial engines are only visible at low tide

25. June 2010 ©kjell sørensen
Jonathan and Noah with some pieces of the Condor