Took off from Fornebu at 10:00 on a mission to Åndalsnes. Above Romsdalsfjord the Heinkel was hit and damaged by AA-fire from HMS "Manchester". The crippled Heinkel bomber was shortly after attacked by two Skuas (801 Sqdn) from carrier "Ark Royal". The mechanic, Willi Stock was shot dead in the attack. The pilot , Fw.Gumbrecht, made a forced landing in the snow at mountain Digervarden. The body of Uffz.Stock was left inside the aircraft. Oberfeldwebel Günther Hölscher. Fw.Richard Gumbrecht. Uffz.Karl Stolz(wounded). Uffz.Willi Stock(KIA). The surviving 3 crew members walked down to Lordalen. Three days later they were captured by a Norwegian ski-patrol and spent the rest of the war as PoWs in Canada. They were released in December 1947 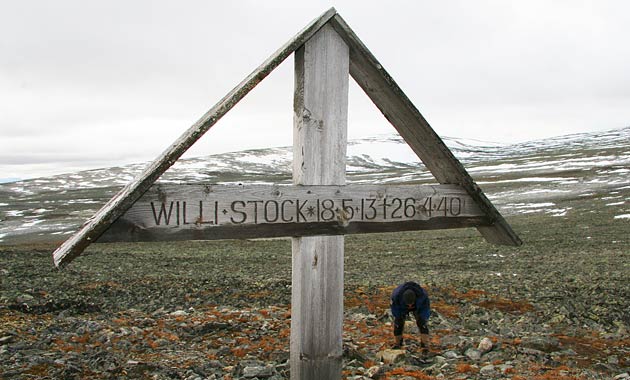 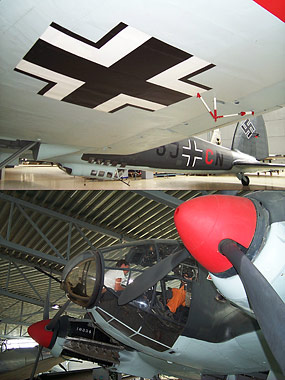 The Heinkel bomber was discovered by Øystein Mølmen on Easter 1943. Uffz.Willi Stock was buried here at the crash site in spring 1945
The Heinkel was brought down to the museum at Gardermoen in 1974
Digervarden 09.09 2007 © kjell sørensen- morten moe-åge bratt- paul kidell
Gardermoen 26.07 2005 © kjell sørensen

right: Morten holding the remains of a folding anti-dazzle screen. They were attached to the control column of the Heinkel, to protect the pilot from being blinded by the glare of searchlight by night.
09.09 2007 © morten moe