The same unit lost two more planes on this day, when WNr.5615 and WNr.5711 crashed into the sea at island Gangsøya 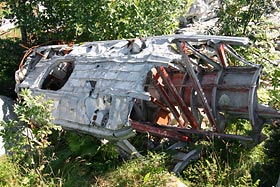 According to locals this A/C was attacked and got damaged over Vigra. They made a forced landing on Frøysjøen and drifted to the shore at Berle. There they were attacked again, this time by the Norwegian patrol boat "Hval V" operating from Måløy. One of the engines was shot off and fell into the sea. The crew were taken POW's and carried away by m/k "Bergholm" to Måløy, and further on to Nordfjordeid onboard S/S"Gudvangen" The crew were released 05.05.40.

On the 13. April 1940 "Hval V" received reports that two German transport aircraft had landed at Gangsöy in Vaagsfjorden after having passed over Maaløy. They were found and after some warnings to the German crews, shot up. The two crews were taken POW's.
They also received reports of a third aircraft that had landed at Berle in Fröysjöen and the crew had gone ashore. When "Hval V" was sighted, they got on board the aircraft and tried to escape. However, "Hval V" opened fire immediately and the aircraft received a direct hit. The crew got ashore once again and surrenderes to the owner of a nearby farm. They were brought to "Hval V" as POW's. The following day, 14. April, all three aircraft were towed to deep waters and sunk.
source: "seaplanes" on Twelve oclock high discussion forum.