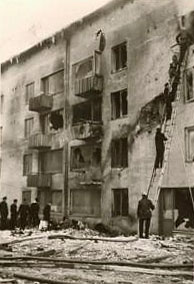 The Blenheim took off from Sumburgh Shetland on a recce mission over Trondheim. The A/C circled at low altitude over the city, looking for a place to land. The Blenheim was probably damaged by flak over Fosen/ Trondheim, and shortly after it crashed into the roof of the officers barrack at Småbergan in Trondheim. The barrack was occupied by German officers at that time. One of the Bristol Mercury engines hit a house in Haldensgate and started a fire. One member of the crew was also found in the same street. Another was found in Festningsgata. The remains of the aircraft landed in Stadsingeniør Dahls gate and started a fire there too. No civilian casualities were reported.