Left: One of the two 23 mm VYa (Volkov Yartsev) cannons in the wings. Photographed in 2001.The cannon was not there anymore when we visited the place in 2006. 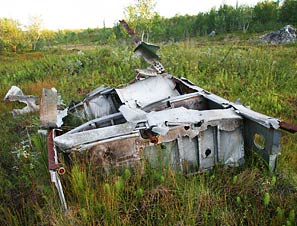 Six Airacobras, six Shturmoviks and four Jak were attacking Kirkenes for the third time this day.The aircraft was hit by AA-fire from 1./gem.Flakabteilung 426 and 2./gem.Flakabteilung 527.The aircraft aborted its attack and was returning to base when it was attacked again by a Bf 109. The engine stopped at low altitude and they had to make a forced landing. Both Russians survived the crashlanding in the bog, but were soon after captured by Austrian Gebirgsjägers. Pilot JLt.Aleksander M Mikhaylov. Gunner JSgt.Vladimir M Bulekov.