Two aircraft were seen to collide in mid-air.

Helbig and R Lehnert are both buried at Solheim Cemetery 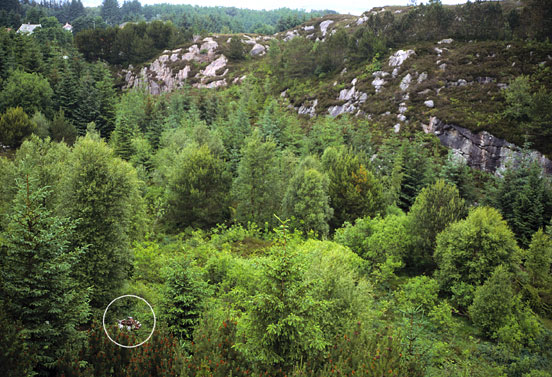 Flt Sgt S W Couttie was the only crew member that survived the combat. He was picked up from the sea by the Germans and became POW the rest of the war

The bodies of two Allied crew were found in the sea. Flt Sgts F Shew and C Cash. They are buried at Møllendal Cemetery in Bergen.

One German was killed onboard the flak ships, nine were seriously wounded.

The BMW 801 engine and other parts from Helbig's Weisse 14

Nine Fw 190's took off from Herdla at 11:20, and headed south towards Leirvik harbour. The Banff Strike Wing took off at 09:35, with six Mosquitos from 143 Squadron, four from 235 Squadron and four "Tsetse" Mosquitos from 248 Squadron. In addition were the two outriders from Norwegian 333 Squadron. They were attacking the German cargoship "Claus Rickmers", flak ship V5304 "Seehund" and V5308 O B Rogge, and Raumboot R63 at Leirvik harbour.

The airfight started at 11:29 and lasted for about 3 minutes. Weisse14 was badly damaged by a "Tsetse" Mosquito of 248 Squadron, flewn by Fg Off Peacock, navigator Field. Uffz.Oskar Helbig crash landed in rough terrain at Melingsvarden. He was rescued out from the burning wreck, but died the next day. Helbig is buried at Solheim Cemetery, Bergen