Petty Officer Airman Edward George Robert Harwin (22) and Tag. Naval Airman John Richards Maunder (18) both lost their lives when their aircraft crashed into the mountain side in Svartedalen at 18:25. They are buried at Rossebø Cemetery, Haugesund. Their target this Friday was the Shell oil tanks at Skålevik, but above Byfjorden the Skuas were attacked by four Bf 109's based at Herdla.
Two of the Skuas were shot down.

Skua L3030 of 801 Sqdn. made a forced landing into Hjeltefjord.
Lt. T. E. Gray and Lt. J. C. William Iliffe were both picked up by the Germans. They spent the rest of the war as PoW's in Germany.
They were shot down by Uffz.Ludwig Fröba of II./ JG 77.

A couple of days later the Germans tried to bury the crew near by the crash site, but some locals brought the bodies down to the village and they were buried at Sandnes Cemetery.

In 1945 the remains of Harwin and Maunder were transferred to Rossebø Cemetery in Haugesund. 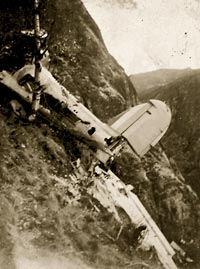